The 1522 Siege of Rhodes: Causes, Course and Consequences 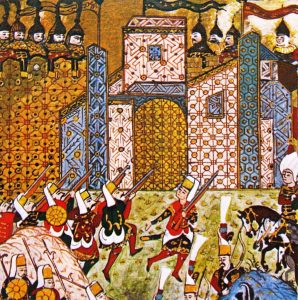 The 1522 siege of Rhodes was one of the main events of the sixteenth century. We invite proposals for book chapters on the theme of the 1522 siege of Rhodes. The working title of the book is The 1522 Siege of Rhodes: Causes, Course and Consequences. We expect to publish with a major and well-respected publisher in 2022, to coincide with the 500th anniversary of the siege. Proposals can be on any aspect of the siege, but should fit into one of the three main categories:

Chapters do not necessarily have to focus on military themes. For example, they could explore the economic causes, the portrayal of various communities during the siege, the Hospitallers’ search for a new base in the aftermath of the siege, or Rhodes in the early years of Ottoman rule.

A short abstract of 300 words explaining the aims and objectives of the chapter and how it fits into the general theme of the book should be sent to Simon Phillips (simondph@ucy.ac.cy) by 21 August 2020. We will inform successful applicants by 31 August 2020. If accepted, contributors should submit a chapter of about 6,000 words including annotations by 28 February 2021. A short extension is possible in extenuating circumstances.

We also envisage a conference on Rhodes between Western and Greek Easter 2022, where contributors can present their findings to their peers and the wider public.