Origins of the Greek Revolution

24 Mar Origins of the Greek Revolution

Origins of the Greek Revolution

On the 25 March annually Greeks, Hellenes and philhellenes worldwide celebrate the beginning of the war of independence against the Ottoman Empire. Yet it is important to note that the movement behind this was not all home-grown, but mostly owes its emergence to the Greek diaspora and the ideas of liberty inherent in the Enlightenment. This article will give a brief outline of the origins of the Greek Revolution that began in 1821.

In 1814, Emmanouil Xanthos, Nikolas Skouphas and Athanasios Tsakaloff formed the Philiki Etairia (Friendly Society) with the aim of freeing the ‘motherland’ from Ottoman oppression. Friendly societies at that time were sometimes, though not always, covers for political organisations that were otherwise banned.

At first the Philiki Etairia did not attract a large  membership, but from 1818 it became more popular, particularly with merchants. The Society twice asked Count Ioannis Kapodistrias, joint foreign minister of Czar Alexander I, to become its leader. He declined, as he  considered its aim doomed to failure, though he kept their secret. He also suggested that they wait until the next war between Russia and the Ottomans, when the Turkish forces would be weakened. The Society then offered the leadership to General Alexander Ypsilantis, also in the service of Russia. It was he who led a small army across the River Pruth in March 1821, taking advantage of the Ottoman’s engagement with suppressing the warlord Ali Pasha.

The Greek Orthodox Church at first denounced Ypsilantis’ actions, perhaps worried about the loss of their privileges and any backlash. Gregorios V and the Holy Synod accused them of not only going against the Ottoman sultan, but also God’s will. Despite this, the Ottomans executed Gregorios, because they considered that he had failed to keep his ‘flock’ under control. 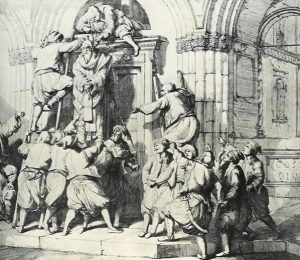 The hanging of Patriarch Gregorios V

The Turks easily defeated Ypsilantis army at the Battle of Dragatsani in June 1821. However, other simultaneous uprisings were occurring in the Peloponnese, although it is not clear if these were coordinated or not. Caught by surprise, outnumbered and unable to deal with the traditional kleftic warfare, the Ottomans retreated to their coastal fortresses. Greek nautical skills helped them to dominate the Aegean. The rest is history!