Below is the text of my contribution to the Conference/exhibition, Chipre a través de los tiempos. It took place on 7 November 2012 at the Facultad de Geografía e Historia de la Universidad Complutense de Madrid. It was held to coincide with the Cyprus Presidency of the Council of the European Union, between July and December 2012. The proceedings were meant to be published, but weren’t, so I reproduce the poster and short revised text below. It was written as a brief introduction for a general audience. 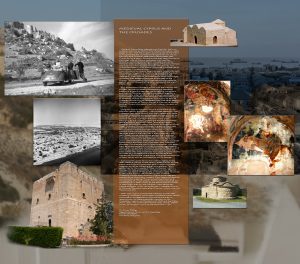 MEDIEVAL CYPRUS AND THE CRUSADES

Medieval Cyprus (i.e. Frankish, Latin, or Lusignan Cyprus) began in 1191, with King Richard the Lionheart of England’s conquest. On his way to the Holy land, Richard’s fleet had to take shelter near Cyprus during a storm. Richard attacked the island on the excuse that Isaac Comnenus, the Greek ruler of Cyprus, had acted with hostility. Comnenus had  alledgedly captured some English crusaders as well as Richard’s sister and fiancée, Berengaria of Navarre. Richard imprisoned Comnenus in silver chains, as he had promised not to confine him in chains of iron.

From this point on, Cyprus became closely linked with the crusader kingdoms in the Holy Land and the Frankish West. It should be pointed out that Frankish did not necessarily mean the French. It referred to those Latin-right Christians that accepted the Pope as the head of the Church. This connection continued beyond the medieval period, up until the end of Venetian control of the island (1489-1571).

King Richard the Lionheart sold the island to the Knights Templar for 2000 gold sovereigns. In doing so, he create a direct link between the Crusading movement and Cyprus. However, the island proved too large for a small military order to control. After an uprising by the native Greek population, the Templars returned the island to Richard’s control. Richard then sold Cyprus to Guy de Lusignan, former king of Jerusalem, took part in Richard’s invasion of Cyprus. However, it was not he, but his brother Aimery who established the Lusignan dynasty on Cyprus.

Lusignan control of Cyprus led to a social hierarchy of Frankish nobility and gentry, with a Greek peasantry. The Lusignans kept strict control over their vassals and made sure that no possible powerbase against them evolved. They kept all walled towns on the island under direct royal control. The only non-royal fortresses were the Knights Hospitaller castle at Kolossi and the Knights Templar castle at Gastria.

Lusignan control also meant the formal subjugation of the Greek Orthodox Church, although in practice they continued their own practices. There is a misconception that the Orthodox monks of Kantara were executed because they used leavened bread in their services. This is dispelled in the main Greek source covering the period, the Martyrion Kyprion. It clearly states they were executed because they called the Latins heretics for their use of unleavened bread. Latins also took over, or at least used, Orthodox churches. For example, the Hospitallers used Orthodox churches in the areas where they had properties. Two cases in point are the churches of St Eustathios at Colossi and Panagia tou Kampou at Choirokitia. Some of the frescoes focus on military saints, such as St Eustathios and St George.

Cyprus continued to have links with crusading in the later medieval period. In the century after the loss of Acre (1291), the kings of Cyprus took part in various Crusade Leagues. They also initiated their own actions. This was epitomised by the crusade of Peter I of Cyprus. He and the Hospitallers managed to take and hold the Mamluk commercial centre of Alexandria for six days in 1365. However, by the 1390s, Cyprus was not taking part in active crusading. Nevertheless, the Lusignans allowed corsairs (many, from Catalonia) to operate from Cyprus  against non-Christian shipping. This eventually backfired. As a consequence of corsair attacks, the Mamluks attacked and subdued Cyprus after the Battle of Choirokoitia in 1426. Thenceforward, the Lusignan rulers paid tribute to Egypt. The tribute continued in Venetian Cyprus to Ottoman Constantinople after Ottoman victory over the Mamluks in 1517.

After 1426, Cyprus contributed indirectly to the wider crusading movement. The Knights Hospitaller continued to hold extensive properties on Cyprus. The dues, or responsiones, on these properties were sent to the Hospitaller treasury on Rhodes and then Malta. This continued into the 1560s, shortly before the fall of Venetian Cyprus to the Ottomans in 1571.

Chronicles of the Crusades. Eye-Witness Accounts of the Wars between Christianity and Islam, ed. E. Hallam, Godalming, 1989

‘Hospitaller Relations with the Local Community on Cyprus’, S. Phillips at the Fourth International Cyprological Congress, Nicosia, 29 April-3 May 2008.

You are invited to leave pertinent comments below. Please restrict comments to the subject of the blog. No comment appears until it has been screened, to ensure it is relevant and not an advert. Thank you.