Our Lady of the Victory Church

08 Apr Our Lady of the Victory Church

A plaque reads ‘Unidentified church at Kisthiniou Street’, but is this the site of Our Lady of the Victory Church? It’s still commonly thought that the Victory church site lies in the North-East corner of Rhodes’ old town walls. Yet Elias Kollias, former Ephor of Byzantine Antiquities, Rhodes, had his doubts, as expressed in a 2007 publication. Jean-Bernard de Vaivre extended this line of thought (2013), providing compelling evidence that the ‘unidentified’ church had been identified.

Our Lady of the Victory Church 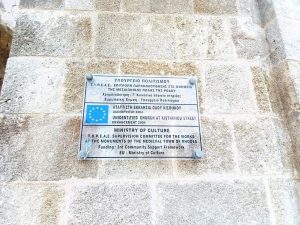 The remains of the church lie inside the old town, just to the left of Acandia Gate. This is where some of the heaviest fighting occurred during the 1480 siege that Grand Master d’Aubusson took part in. It’s therefore logical that d’Aubusson should found a church there.

The Discovery of Our Lady of the Victory Church

Rottiers visited Rhodes in the early 1800s and coenobite Father Jean-Baptiste took him to the remains of the Victory Church. He explained that on 12 November, 1693, Christian slaves were repairing the city walls in the Jewish quarter. They found a bas-relief representing the Virgin and the Child with the coat of arms of d’Aubusson on it. The slaves gained permission to take the bas-relief to their prison, where they venerated it. In 1723, the governor of Rhodes authorized its transfer to the coenobite’s church. This took place on 15 August accompanied by a procession. Rottiers saw the bas-relief in the church in 1824. 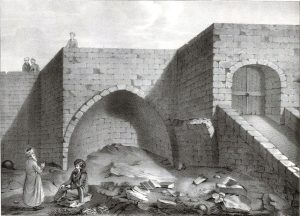 Our Lady of the Victory Church. Source: Rottiers, 1828, Plate Lvii 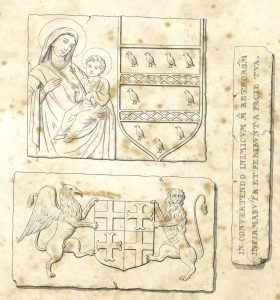 Bas-Relief from Our Lady of the Victory Church. Source: Rottiers, 1828, Plate XX

Rottiers then relates that Father Jean-Baptiste showed him the ruins of Our Lady of the Victory Church. He says it was ‘attenant aux fortifications de la place’ and later that it was partly built against the rampart of the wall and a climb leading to it. Jean-Baptiste told him that the Turks were forced to retreat from that spot on 27 July, 148o. This was after fierce fighting that d’Aubusson was himself involved in and the apparition of the Virgin Mary holding a shield and spear. It was to specially commemorate the victory over the Turks and the Virgin’s intervention that d’Aubusson financed the church’s building.

Conventional wisdom places the church in the most north-eastern corner of the town, next to St. Catherine’s Gate. There is still a plaque there stating it is the Our Lady of the Victory Church. Indeed, there are the remains of a church built next to the wall there and it is in the Jewish quarter. Conversely, Jean-Bernard de Vaivre argues that the Turks could not have placed their artillery effectively to batter the wall if the battle had been close to the St. Catherine’s Gate. He also cites that the Turks breached the walls not far from the bastion of Italy. Anna-Maria Kasdagli and Yanna Katsou (2007), prior to de Vaivre, considered that this may be the site of the Victory church, based on the archeological evidence.

Caoursin’s account of the siege notes that the Turks placed ladders leading into the Street of the Jews (Kisthiniou Street). The Grand Master himself climbed a ladder and took part in hand-to-hand fighting. D’Aubusson’s own account mentions the Turkish attack on the walls enclosing the Jewish sector and around the Tower of Italy. So it seems the thick of the battle took place in the south-east section of the Jewish quarter. This corroborates the description given by Rottiers. Thus it appears de Vaivre’s assertion has the body of evidence behind it. The results of excavations overseen by Kollias in the 1990s further support his view.

There is, however, at least one outstanding issue caused by the description of the church in d’Aubusson’s bull of 1493. It should have a large portal, a quire, high-altar with stalls, a monastery, library, small garden, cells and other elements. These different parts would take up a lot of space that does not appear available on the current site.

However, there may be more remains that are not at present visable. Excavations in 1995 indicate there was another larger church north of the current ruin. On this basis, some suggest that the current ruin may be that of St. Pantaléon. Yet d’Aubusson’s bull founded a church under the name of St. Mary of the Victory, comprising two chapels or oratories. The largest chapel, named the Assumption of the Virgin Mary, should be to the south. The smaller chapel named St. Pantaléon was to the north. The bull, then, places the large and small chapels in the opposite positions to the excavation findings. Perhaps the plans changed during the actual construction.

Clearly there is room for further study and clarification. Yet it’s clear the site in the far NE of the city isn’t Our Lady of the Victory Church. Given that, it’s attribution as such should change and perhaps be tentatively credited to the ‘unidentified’ church.

It is my view that the ‘unidentified’ church is indeed Our Lady of the Victory Church. Apart from the evidence stated above, I think it is significant that it was partly built into the wall. It symbolises not only where d’Aubusson fought, but the Vigin Mary’s intervention, the linking of spiritual and physical worlds.